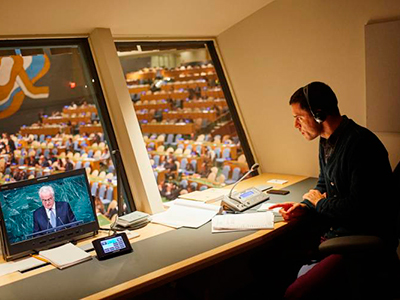 It’s Friday morning at the UN headquarters in New York and Sophie Louyot – chiffon scarf wrapped tightly around her neck – is marching around the corridors of power. In a few minutes a discussion will start in the recently renovated General Assembly Hall about changing the archaic make-up of the Security Council. As acting head of the organisation’s interpretation service, Louyot will need to make sure all of her staff are promptly in place to help the 193 member nations decipher the formal prologues and impassioned speeches of each other’s delegates.

Perched above meetings in booths that curve around the circumferences of the main debating halls, interpreters provide an invaluable service, often making it look far easier than it is. Hunched over microphones, they peer through tinted windows at the delegates, simultaneously interpreting the audio feed from their headphones (usually into their mother tongue, often fired out in a rapid staccato to keep up with the interlocutor below). The mental acrobatics taking place are second to none, which may explain why interpreters only work half-hour shifts at a time.

“You have to be listening and you have to be talking at the same time,” says Belgian-born French interpreter Véronique Vandegans. “If you interpret literally that isn’t going to work. And if you have time, which isn’t usually the case, you have to be able to correct yourself.” As well as making split-second decisions and performing multiple tasks, understanding what is happening doesn’t simply involve following the speech. Interpreters, whose salaries start at about €44,000, have to be abreast of the inner machinations of the UN, from jargon to current affairs. This is a seven-days-a-week job where, in their half days and free time, staff need to be reading up on official documentation and making sure they are consuming media in the multiple languages from which they interpret. “But the main language we have to master is our own,” says Vandegans who, for a recent meeting, had to learn how a nuclear power plant worked, along with all the accompanying vocabulary. “You need to be able to express yourself in a way that is easily understood by all delegates.”

A strip-lit corridor links the language booths above the General Assembly Hall, which span the official UN languages of French, Spanish, English, Chinese, Russian and Arabic. Here all the interpreters seem to have similar motivations: the thrill and even the stress of the job, as well as the feeling they’re making a difference. “I really think that in my humble capacity I can do my part,” says Chinese interpreter Chen Ji, speaking with a refined English accent from years living in Oxfordshire. For Jamaican Paul Pottinger, who works in the English booth, motivation comes from the mental challenge. “It draws on every aspect of your being,” he says. “Your personality, your voice, your intellectual capacity, your general knowledge. You’re just always growing.”

While interpreters may be removed from the theatre below them, the essential part of their job remains communication. And when they have to travel with UN missions around the globe, the interpretation can be much more hands on, such as when Véronique Vandegans went to El Salvador to visit ex-gang members in prison and had to sit and whisper in the ears of delegates. Everyone seems to have a Damascene moment when they were converted to the idea of interpretation as a career path. Vandegans, for example, battled a speech impediment for nine years and wanted a “kind of revenge against the past”, while Spanish booth worker Irene Pérez, who used to be given Mafalda comic books by her father when he returned from trips to Argentina, remembers one strip about the six-year-old main character deciding she wanted to become a UN interpreter. For Aitor Arauz, also from the Spanish booth, his job at the UN supplanted any dreams he had of moving to London and becoming an actor. “This has fulfilled all my performative aspirations,” he says with a grin. “You’re closely engaged with world peace, politics and all the wheelings and dealings of a highly staged international attraction.” Interpreters, who can train for up to six years before taking a job, sometimes also have to battle against being swept up in the constant political bun-throwing. “I am Russian so, of course, when some issues are discussed that are very sensitive I have my own opinion and feel something,” says Russian booth interpreter Anna Tuneva. “But you cannot let it reflect on your job in any way.”

Invariably “language use is political”, according to English booth interpreter Penny MacDonnell. Rwanda’s decision to switch its official language from the French of its former colonial ruler to English speaks volumes; likewise the move by Ukrainian delegates, fluent in Russian, to speak English at most official UN meetings. Many delegates across the language spectrum have trained themselves to simultaneously listen to the interpretation while they’re giving their speeches because they want to ensure it is as accurate as possible – or, put another way, they want to ensure it conveys their message exactly the way they see it.

Away from the heated debate in the General Assembly Hall, students gather around a table in a conference room for Arabic language training. Unlike the majority of UN languages, where interpreters work from one or more foreign languages into their mother tongue, Arabic goes both ways. This is largely because of the nuances of the language, which make it very hard for a non-native speaker to master; the only other language with the same set-up is Chinese. Despite the 129 permanent staff members, the UN currently has a shortage of Arabic interpreters and the teaching, culminating with exams in January, is directed at correcting that disparity. Tutor Rama Ahmed says her task is to make trainees “inter- lingual”. This is not always easy when the classical Arabic required at the UN is essentially “a foreign language” compared to the colloquial, regional forms that pupils speak on a day-to-day basis.

Watching over proceedings is Arabic section chief Ashraf Kamal, originally from Egypt. Stressing the importance of a job where “you could unwittingly start a war, or just about”, he cites the notorious occasion when there was a furore in the Knesset after a slip of the tongue during Arabic interpretation at the UN informed delegates that Israel and Hezbollah had always exchanged “secrets” instead of POWs. Kamal has been at the UN for more than three decades and, despite stints as a spokesman for the UN’s Independent Inquiry Commission and a public information officer at its Iran-Iraq Military Observer Group, he has always returned to his first love: interpreting. “The day you take it for granted,” he says, turning serious for a moment, “is the day you should quit.” Mentally and often emotionally exhausted, interpreters wouldn’t have it any other way.

Notes: Let’s talk
Although interpreters are best known for the simultaneous service they provide – the taxing, instantaneous voiceover fired out on world stages such as the UN General Assembly – they also fulfil another role: consecutive interpretation. Performed at smaller gatherings and when the UN goes on missions, it means interpreters listen to a speaker for up to five minutes before they respond with the interpretation.

Not lost for words
Graduates of the University of Geneva’s interpreter-training programme are some of the best in the world; here’s how they learn their craft.

In the University of Geneva’s airy main building, sun streams into a top-floor classroom. Ten young people chant, stretch and do relaxation exercises. But this isn’t a yoga break: it’s a voice-training workshop for students of interpretation. The voice is their main tool so keeping it strong, healthy and confident is essential.

The workshop is part of an MA in conference interpreting, where students spend 18 months honing skills such as listening, comprehending and analysing in one language while speaking and essentially performing in another – in real time. “How is the human brain capable of such an unnatural task?” asks Kilian Seeber, director of interpreting at the university’s Faculty of Translation and Interpreting. “We believe in a teaching method based on research and we do a fair amount here on multilingualism, cognitive psychology, psycholinguistics and how the brain performs.”

The interpreter-training department opened in 1941, making it the oldest programme of its kind in the world. In its early years interpretation – which became widely known during the Nuremberg trials – was taught intuitively but things have changed since then. “Rather than throwing students in at the deep end, we identify subtasks,” says Seeber. Students first learn consecutive interpretation, then move on to simultaneous, at ever-increasing speeds. Comprehension and message analysis are early steps; memory and voice training are constants.

About three quarters of the students pass their exit examinations. “Most of us don’t pass on the first try,” says Andrew Stead, who will take his exam before a jury of instructors and interpreters. His job prospects are good. “Our programme allows graduates access to the highest level of conference interpretation,” says Seeber. “I see recent grads with heads of state; I see them in reports on the World Economic Forum.”

Interpretation is an exceedingly high-pressured job that demands focus, endurance and nerves of steel. “It’s a great reward to have people depending on you,” says student Toufik Kacem Chaouche from Algeria. “You won’t get a thank you but you feel you’ve helped communicate. When we think about this reward, we forget the stress.” 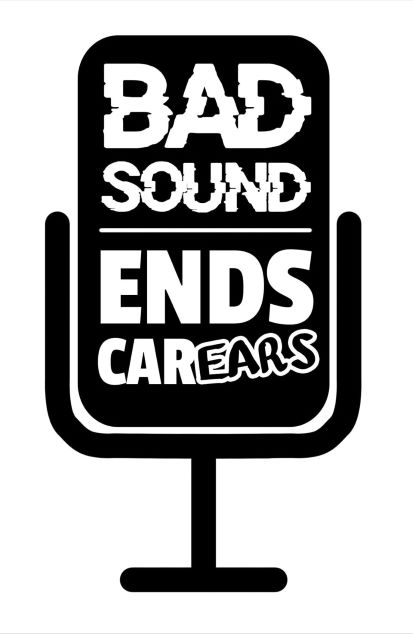 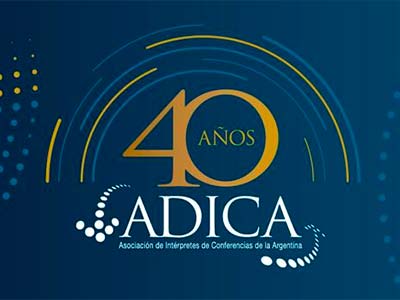